On Tuesday 4th February, Boris Johnson launched the UK-hosted UN climate summit and announced that he would bring forward the end to the sale of new petrol and diesel vehicles from 2040 to 2035 – or earlier if possible – and include hybrids for the first time.
As with all such long range, broad announcements, it was not clear what the detailed policy would be and how it would be implemented.  As such, the announcement caused a flurry of speculation and guesses for motorcyclists, with conflicting conclusions drawn.

As always, MAG has taken the sensible approach of seeking clarification.  Speaking to Phil Killingley, Deputy Head of the Office for Low Emission Vehicles (OLEV) at the Department for Transport, MAG’s Director of Campaigns & Political Engagement, Colin Brown, received confirmation that the 2035 ban does not apply to motorcycles. Colin commented “We are pleased to hear that the ban from 2035 will not apply to the sale of petrol-powered motorcycles.  Our membership consists overwhelmingly of petrol-engine bike users who do not wish to see the very thing they love banned.  Yet it is clear, speaking to the Department, that the threat remains. It will not surprise anyone that the debate over electrification is also taking place in MAG, with a range of views expressed.  The task ahead is to plot a sensible, evidence-based approach in a subject area that ignites great passion and emotion.”

On Tuesday 4th February, Lembit Opik, MAG’s Director of Communications & Public Affairs, attended a key meeting in Parliament where Visiting Professor at Oxford and Imperial College London, Gautam Kalghatgi, explained why petrol- and diesel-powered vehicles cannot, in reality, be banned by the 2035 deadline.  Professor Kalghatgi argued that the largescale adoption of electric power creates enormous and, as yet, unsolved problems.  Lembit said “this is a highly complex issue in which all factors need to be weighed and the impacts fully understood before decisions are made.  The answers for motorcycles are different to those for cars regarding readiness for electrification and impacts on users, so it’s vital motorbikes are considered separately to cars and vans.”

The government is consulting on the 2035 proposals, telling stakeholders: “We are aware that stakeholders will have a diverse range of views on this subject and both Ministers and senior officials will be engaging closely to understand what those are.” The subjects that they want feedback on are: the phase-out date; the definition of what should be phased out; barriers to achieving the ambitions set out in the consultation; the impact of these ambitions on different sectors of industry and society; and what measures are required by Government and others to achieve the earlier phase-out date.’

National MAG Chair, Selina Lavender, added: “MAG is on the list of stakeholders and will be engaging fully with OLEV so that the views and opinions of our members are fully represented.”

Another successful Mad Cow Rally, thank you to everyone that came along and all the helpers that makes them possible. 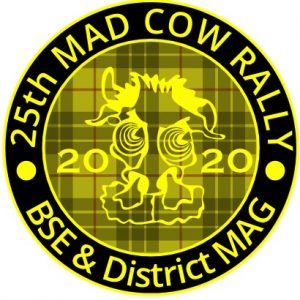 We meet on the 1st and 3rd Wednesday of each month, at the British Sugar Sports and Social Club, Hollow Road, Bury St Edmunds. at 8p.m. in the Bar.